“We do not remember days; we remember moments.” Cesare Pavese

If you’re like me, looking back on a long career doesn’t involve reliving entire workdays, just afew dramatic moments, some good, some not. I’d like to
pass along one of my best, then I’ll tell you why I’m telling you and how we need your help…

In 1988 I sold the research company I owned because I kept insisting to myself and everyone else What I really want to do is be a writer. Having sold the company, I had the time and money. And, suddenly, I also had the fear (gulp) — it was time to put up or shut up. A
couple years before I’d written a book that didn’t sell and the thought of taking on another was daunting.

Then a friend who wrote an occasional column for a suburban newspaper introduced me to the Business Editor. Soon I had a weekly column called “The
Corporate Curmudgeon.” No pay, but a weekly deadline and an Executive Editor who had a mantra, “Deadlines are your friends.” Indeed. I learned the
marvelous skill of writing on demand.

(The novelist Peter DeVries once said,

I write when I’m inspired and

I make sure I’m inspired every morning at nine o’clock.”)

The Executive Editor liked my work and gave copies of my best columns to one of the country’s major syndication companies, King Features. One of their
editors called and said, “We want you. We’re sending a contract.” No feeling out, no negotiation, just a big we-want-you. That’s a good
moment.

That brings us to the memory I wanted to tell you about.

Nice, eh? What I could never have dreamed at that moment was newspapers would die off and syndicated columns become almost extinct, but for that moment
of that day I understood the joy of a career journey.

Al LaCanne is an old friend, and his company is one of the owners of Silveridge and The Resort. We were talking aboutmemories and he said,

“If you want great stories, you need to come with me out to the RV parks.”

I was hooked. What writer doesn’t yearn for a fresh source of stories? My typing fingers were itching.

Eventually that conversation with Al eventually led to an agreement that we’d replace the old newsletters at Silveridge and The Resort with new
in-house publications, and I’d be the Editor. You’ll be seeing them evolve over the coming months.

For now, we picked a name for each, suggesting a newspaper format…

I suggested that we add a motto for each park. From talking to Al I knew that his motto for the staff is, “We’re here to help you have fun.” Al tells
me that his personal goal is a big one: “To have the happiest residents of any RV park in the world.”

Using those themes, I conjured up a few possibilities—a few of them are below.

When I asked Al to pick one for each park, he said, 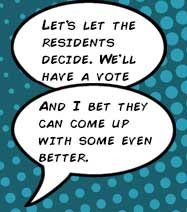 “Let’s let the residents decide. We’ll have a vote.”

“And I bet they can come up with some even better.”

So there you are… the gauntlet is thrown down. We want you to come up with suggestions better than these, then we’ll take the best and send them to
you for a vote. Sounds like more fun than the Presidential debates, doesn’t it?

You know your park better than I do, so I bet you can do better.

Drop your suggestions at the office or email them to me: dale@dauten.com.