Mary and Lee Bixler’s time to see someplace new came last year. Time to leave the farm in Pennsylvania. Where to go? That’s the beauty of buying a DRV Fifth-wheel – you just go and see where you end up.

Lucky for us, Mary and Lee ended up spending the season at The Resort—Mary runs the kitchen as Chef and Lee is on the Maintenance team.

Mary and Lee both grew up in Pennsylvania, not far from Amish country; Lee on a dairy farm outside Maytown, and Mary on a beef and hog farm outside Elizabethtown. They met in a teen youth group at church, eventually married in 1973 and then settled near Gettysburg. There they raised their three kids and held fulltime jobs — Mary as a cook for a small college and Lee restoring old homes and barns. But they also owned a small farm where they raised crops and kept chickens, selling produce and eggs at farmers’ markets.

Back in 2000, they bought an RV camper and took a six-week trip to the West and Northwest. That turned out to be a rehearsal for a new life, one that began in 2015 when they put the farm up for sale and bought the fifth-wheel. They weren’t ready to retire, but were ready for something and someplace new. Their solution? Work-camping (also known as “workamping”). As Lee puts it, grinning, “We needed something to do to stay out of trouble.”

Their first stop was working at Ft. Stevenson State Park in North Dakota. Then, they spent this last summer at an RV park at Hershey, Pennsylvania.

The Resort’s GM, Rhonda Ciacco, heard the couple might be available and hired them to spend the season with us. When I visited with Mary and Lee, we sat poolside on a bright, 70-degree afternoon and we thought together what it was like back at their old home, in Pennsylvania. (I checked: cloudy and less than half the temperature in Mesa.) They not only love the weather, but the shopping, Mary pointing out, “We have everything right around here. Back home, it was ten miles just to get to a decent grocery store.”

You’ll spot Lee working throughout the park. He starts at the pool. “We test the water everyday,” he explained. “We start at 6AM so we’re out of the way before classes start at seven.” He also does plumbing and electrical work, tree trimming and makes daily rounds, looking for broken branches or other problems. And he helps maintain the flowers. 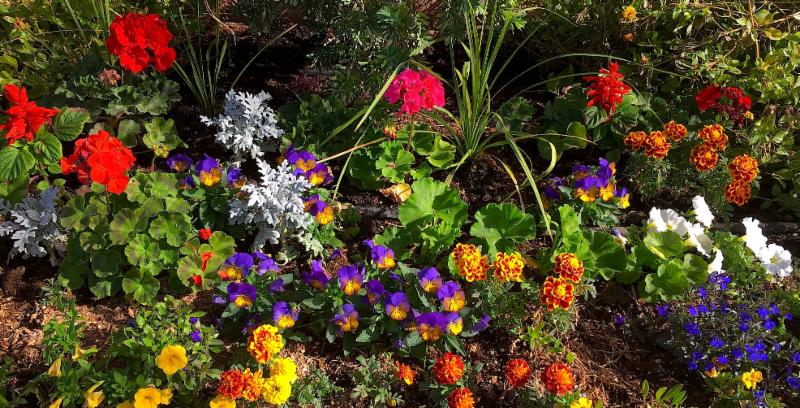 Mary’s job title is Chef. Of the weekly dinners and the dinner shows and all the other events with food that she oversees, she says, “We couldn’t do without our volunteers. We have an wonderful group of experienced people – some who’ve been helping out for 15 or 20 years, and we’re always looking for new volunteers who want to pitch in.”

As the three of us sat by the pool, GM Rhonda Ciacco stopped to say hello. She said to me, “Write that they’ll be back next year.” I knew that the Bixlers still had the farm to sell, so they haven’t planned that far in advance, and started to say so. But before I could, Rhonda smiled and said, “They’ll be back.” Let’s hope she has it right.